UK’s Department of Culture, Media & Sports, through their £25M 5G test bed program, is supporting 5G Rural Integrated Test Bed (5GRIT). As part of 5GRIT, the local events, heritage places and oral histories in few villages and towns in the North Pennines have now been made discoverable in augmented reality using the World Around Me (WAM) app, powered by WAM Tourism Platform.

World Around Me (WAM) is an augmented reality based local discovery app that helps people in finding places to eat, drink, shop, stay, commute, pray, refuel, keep healthy or access money anywhere in the world. Available in 26 languages on iOS and Android, World Around Me is being used in 200+ countries. WAM helps people visually orient towards a place by using their phone camera – without getting lost in maps. This is a novel discovery experience provided with augmented reality. World Around Me also provides reviews, contact details and lots of essential information about the place of interest.

WAM enables tourists in the rural North Pennines region to search and orient towards local event locations & heritage places along with engaging with audio/video oral histories. The events & heritage content is powered by WAM Tourism Platform. Tourists using WAM on iOS or Android can engage with their surroundings using the  “Discover North Pennines” section, which has the heritage and events search category .

So go ahead and download WAM on iOS or Android to discover places around you wherever you are. If you are in the North Pennines – local heritage and events content is a bonus thanks to the 5GRIT project.

On 28th Jan 2019, a drop-in session was conducted with local tourism businesses to educate them about updating their online profiles to increase discoverability & adding events & heritage content to WAM Tourism Platform. It was received well by the tourism business community who will be promoting WAM to visitors in the region during the tourist season in 2019.

How many times have you struggled to find the first step in the right direction towards your destination? Often times while using a map we walk in one direction and say, “Ooops! Wrong direction! Need to go back”. Good news is that you can just “WAM” places on the phone camera right now – wherever you are in the world.

World Around Me is Editor’s Choice app on Google Play and was on one of Best apps of 2017 on Google Play. Earlier in 2016 World Around Me was awarded Google Play Award in Early Adopter category at a special ceremony conducted at Google HQ in Silicon Valley. It was selected as one of the top 10 apps among 4.6 million apps available on Android.

In Dec 2018 WAM was selected as one of the best apps for 2018 on Huawei’s app gallery globally.

It has been promoted many times by Samsung, Google ad Huawei on their app stores. WAM also has partnerships with TripAdvisor.

There has long been a search for a genuine use case for augmented reality. Good news is that World Around Me has been available on the stores since 5 years and gaining popularity amongst users who say it is a “life saving kit”.

So next time you are looking for a bank, atm, cafe, pub, book store, grocery store, museum, bus stop, metro station, pharmacy, gym, spa, a place to pray or any service, then “just WAM it”. World Around Me is a great app for both locals and travellers.

And if you happen to arrive in the rural North Pennines then you’ll be presented with the local heritage and events search categories. Remember that WAM works worldwide – so you can download and use it wherever you are – but don’t forget to use in during your visit to the stunning North Pennines. 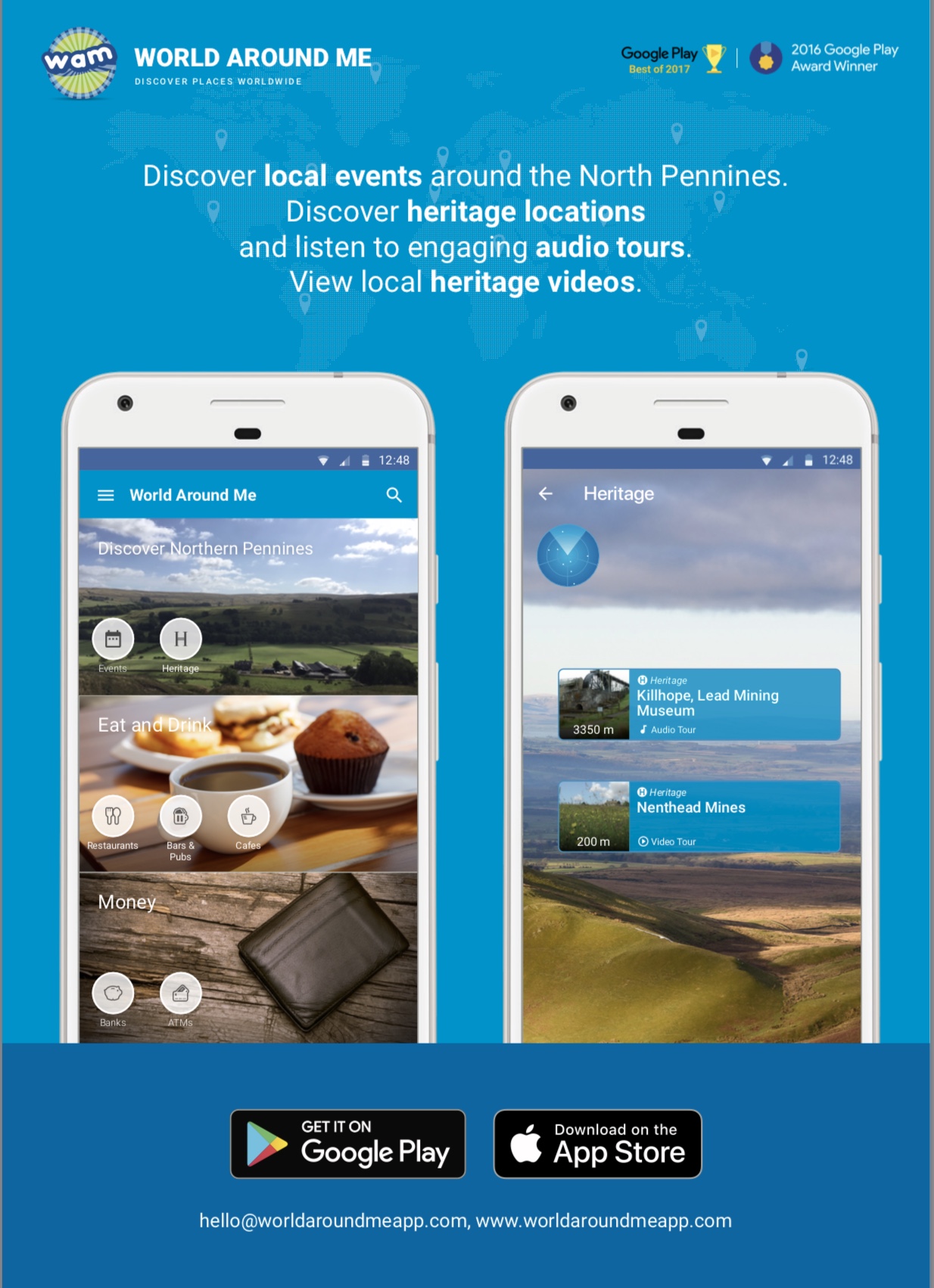